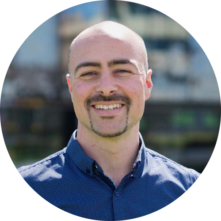 Chronic lung disease is the third leading cause of death world-wide. World-leading research at the RAH is helping patients to breathe easier.

Chronic obstructive pulmonary disease (COPD) is the second leading cause of avoidable hospital admissions in Australia. It affects 14% of Australians aged 40 or over and 66% aged 75 or over*.

Covering a group of diseases including bronchitis, asthma and emphysema, the impact on patients from blocked airways and resultant breathing difficulties can be dire.

“My focus is to address the challenges faced by sufferers of chronic obstructive pulmonary disease,” Dr Roscioli says.

“Exacerbations are a nightmare for people with COPD. They can knock years off their lives and are extremely distressing.

“If we can help prevent exacerbations it could make a huge difference to the way people with COPD live out their lives.”

One focus is to better understand and quantify the effect of bushfire smoke exposure on those with COPD. The other is develop next generation antibiotics that help the body rid itself of a bacterium called nontypeable haemophilus influenza (NTHi), which is thought to cause about 50% of all COPD exacerbations.

Against the backdrop of the decline in efficacy of current antibiotics due to the growing emergence of antibiotic resistant bacteria, the Lung Research Laboratory is working with a team of world leaders in antibiotic design and respiratory disease.

“Our team’s goal is to synthesize a next generation antibiotic that will not only clear airway bacteria, but uniquely, restore the function of airway cells,” Dr Roscioli says.

Dr Roscioli explains that for most people the NTHi bacterium is relatively harmless. In COPD sufferers, it’s nasty. The bacterium is carried from its usual home in the ears and throat to the lungs, where it causes frequent exacerbations.

The body has its own in-built system for clearing intracellular material, called “autophagy” or “xenophagy” when the material is pathogenic, such as NTHi. But this process is ineffective in people with COPD.

Dr Roscioli’s team recently became the world’s first to pinpoint the precise ways which autophagy in COPD sufferers is defective.

“We learned the cell’s bacterial clearance processes are blocked in people with COPD in two specific ways, and frontline antibiotic treatments prescribed to COPD suffers have the potential to block this system,” Dr Roscioli says.

“Rather than helping people, the antibiotics are potentially helping the NTHi, and turning patient’s lung tissues into Trojan horses – giving the bugs somewhere to hide and multiply.

“And the drugs’ repeated application, of course, also risked contributing to the rise of antibiotic-resistant bacteria.”

In the area of exposure to bushfire smoke, climate scientists’ predictions of more such disasters in Australia over coming decades as a result of climate change is concerning healthcare authorities.

“Our research could allow authorities to confidently inform people with COPD that if they stay home with a bushfire nearby, they’re highly likely to be hospitalised with an exacerbation,” he says.

“That could definitely influence their decision to stay or go.”

The recipient of many awards and grants, he has co-authored more than 50 peer-reviewed journal articles, conference papers and items and has been invited to chair internationally, including at the Japanese Respiratory Society.

A member of the Adelaide Medical School Research Committee, he also chairs the EMCR (Early and Mid-Career Research) subcommittee.

Dr Roscioli graduated with a PhD from Adelaide University and also studied at Flinders University.

The Department of Gastroenterology and Hepatology is undertaking pioneering work in treatments for chronic sufferers of Inflammatory Bowel Disease (IBD). Read more