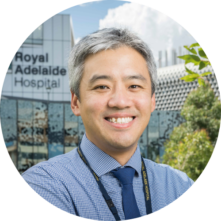 Associate Professor Eddie Tse is a national leader in the field of Hepatology and transplant medicine, particularly in models of care for Hepatitis C treatment.

Chronic liver disease is a silent killer, with few symptoms until it is too late. These diseases can lead to damage of the liver causing cirrhosis. The complications of cirrhosis are significant: chronic liver failure, liver cancer and ultimately death.

Innovative research being conducted at the Liver Clinical Trials Unit at the Royal Adelaide Hospital by Associate Professor Tse and his team, is allowing South Australians access to cutting edge treatments that potentially will halt and reverse the damage done by this silent killer.

While many associate cirrhosis from excess alcohol consumption, many other conditions such as Non-Alcoholic Fatty Disease and Chronic Viral Hepatitis can also lead to cirrhosis.

It is estimated that 40% of people aged over 50 have this condition – that represents 5.5 million Australians. Alongside that, Viral hepatitis (HBV and HCV) is a major community issue that affects more than 400,000 Australians*. ( * The economic cost and health burden of liver diseases in Australia, GESA 2013 )

The purchase of the first Fibroscan® equipment in South Australia in 2010 has enabled the diagnosis and measurement of liver damage through ultrasound shear wave technology. This negates the need for painful liver biopsy, leading to faster diagnosis of liver disease, and less invasive treatments.

Through his work, Associate Professor Tse has a strong interest in improving service delivery, particularly for disadvantaged, at risk, or isolated liver patients.

His outreach work in the Northern Territory, has provided specialist liver care to many remote Australians, including Indigenous communities. He supports the Royal Darwin Hospital as a visiting specialist and remote consultant.

As well, he has been working as a leader in the management of viral hepatitis for the South Australian prison service since 2014. Through his compassionate work with the prison service and innovative models of care, Associate Professor Tse has represented the State on the National HCV Prison Steering Committee.

In 2014, to build an important research resource, he developed South Australia’s first Gastroenterological Biobank. The bank is using the development of 3-D tissue cultures from stem cells to better model and understand liver and intestinal infections.

Associate Professor Tse has also established a new research path with an innovative HealthELink platform, which has the potential to put the capability to manage a large range of chronic disease issues and requirements firmly in the hands of GPs, specialist nurses, carers and patients themselves.

He believes the platform has the potential shake up how we interact with the medical system by positively harnessing technology.

Through HealthELink, the user can log into the system, enter patient’s details and medical condition and then is rapidly advised of the most appropriate treatments through innovative algorithms, based on best Australian practices.

“Chronic disease is becoming one of the largest killers in Australia,” Associate Professor Tse said. “Significant barriers are still in place, preventing those in need of urgent review and assessment.

“We hope one day that projects such as HealthELink will ‘disrupt’ the health industry, allowing specialist lead care to every Australian, so that waiting lists and access due to geographical reasons will be a thing of the past.”

The first phase of the HealthELink project has successfully treated more than 250 patients with Hepatitis C Virus infection, many who are either Indigenous, incarcerated or unable to easily access specialist care. The cost saving of this hospital avoidance strategy is estimated to be more than $250,000 to date.

The project has received numerous accolades and has been awarded the prestigious Don Walker Australian Digital Health Aware for 2017.

Associated Professor Tse completed his PhD at the University of Adelaide in 2014.

The Department of Gastroenterology and Hepatology is undertaking pioneering work in treatments for chronic sufferers of Inflammatory Bowel Disease (IBD). Read more

Chronic lung disease is the third leading cause of death world-wide. World-leading research at the RAH is helping patients to breathe easier. Read more