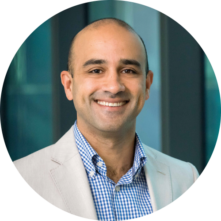 Research Lead, RAH Colorectal Research Group, Colorectal Surgeon at the RAH and Associate Professor at the University of Adelaide.

Colorectal cancer is estimated to become the second most commonly diagnosed cancer in Australia by the end of this year. The RAH team is researching the impact of colorectal surgery on patients in an effort to improve the rate of recovery and quality of life.

Colorectal cancers and benign conditions such as diverticulitis and inflammatory bowel disease can have major impacts on people’s quality of life. In addition to this, the impact of surgery, both in terms of short and long-term outcomes is significant. For many patients this episode of care may be the single most important event in their treatment journey.

The group also contributes to a wide range of collaborative projects within the Biomedical Precinct and with international leaders in the field of colorectal surgery.

The cure rate for colorectal cancer – or bowel cancer – is high, with up to 80% of patients cured.

In light of this, the team’s research focus is on a major issue where there is currently little research – patient post-operative care and recovery.

“The treatment doesn’t end when the abdomen is closed,” Associate Professor Sammour said. “The treatment ends when the patient is home with their family and has a decent quality of life.”

Some of major issues after bowel cancer surgery include nausea, the bowel not working and complications with re-joining the bowel and subsequent leakage.

Currently the team is conducting the biggest study undertaken on the use of laxatives after bowel cancer surgery, with promising preliminary findings.

“We are over half way through now. It appears that patients who take laxatives after bowel cancer surgery, who aren’t going to start vomiting, (about 70% of patients), have their bowels work more quickly and as a result they go home more quickly,” Associate Professor Sammour said.

It is hoped the study will enable a new baseline to be developed for the use of laxatives, a simple but effective treatment. Then the researchers will test novel drugs to tackle the 30% of patients who are not responding to the laxative treatment, possibly due to lack of absorption from vomiting.

The team is also making progress in pre-determining patient individual risk for complications after surgically re-joining the bowel.

A bowel join leak – what is known as an anastomotic leak – can have catastrophic implications such as sepsis, progression to organ failure and death from contamination of the gastrointestinal tract contents leaking into the abdomen.

Previously all patients were considered to have an average 8% risk, but for each individual patient this can vary from 1% to 40%.

“We are getting much better at characterising before surgery what your individual leak rate is and we are then using that to decide whether we should even do a join or whether we should give someone a stoma bag,” Associate Professor Sammour said.

“In the past we used to do the join and hope for the best and give them a bag when it leaked. We are now getting much better at preventing the catastrophe rather than dealing with it after the fact.”

This research has led to the development of a web portal which uses inputted variables such as gender, Body Mass Index (BMI), whether oral blood thinners and anticoagulants are used, surgery complications, blood protein level (a marker for nutrition) and the size of the hospital where the surgery was conducted, to better predict the chances of anastomotic leak, which usually occurs about six to eight days after the surgery.

The team has also just completed an international study with a Netherlands group on intraoperative variables and patient outcomes. This study indicates that any problems during surgery – even those unrelated to the bowel join – results in the patient’s leak rate doubling.

In light of this research, the team will now study the identified modifiable intraoperative measurements such as blood sugar, temperature etc, to determine which can be modified to improve the leak rate.

Research into bowel cancer patient outcomes is increasingly important as there is an increasing rate of younger people presenting with the disease and at more advanced stages. While the cause for this is not known, this group is outside the age range for routine bowel cancer screening, which starts at age 50.

​Associate Professor Sammour has authored more than 90 peer reviewed publications in surgical journals, and six book chapters. He completed a PhD in Surgery in 2011. He became a fellow of the Royal Australasian College of Surgeons (RACS) in 2012. Following this, he undertook two years of accredited post-fellowship training in colorectal surgery at Royal Melbourne Hospital and the Royal Adelaide Hospital as part of the Colorectal Surgical Society of Australia and New Zealand (CSSANZ) accredited training program.

He then travelled to the United States and spent an additional fellowship year at the world-renowned MD Anderson Cancer Centre in Houston training specifically in robotic colorectal surgery and advanced colorectal surgical oncology under the mentorship of leading surgeons in the field.

The Urology Unit is transitioning traditional surgery to modern, minimally invasive robotic surgery, with many benefits for patients. Read more

The team at the Centre are developing possibly one of the world’s first targeted treatments for Acute Myeloid Leukaemia – the cancer that tragically cut short the life of golfer Jarrod Lyle. Read more