Could Tiny Genes Stop the Spread of Breast Cancer?

Could Tiny Genes Stop the Spread of Breast Cancer? 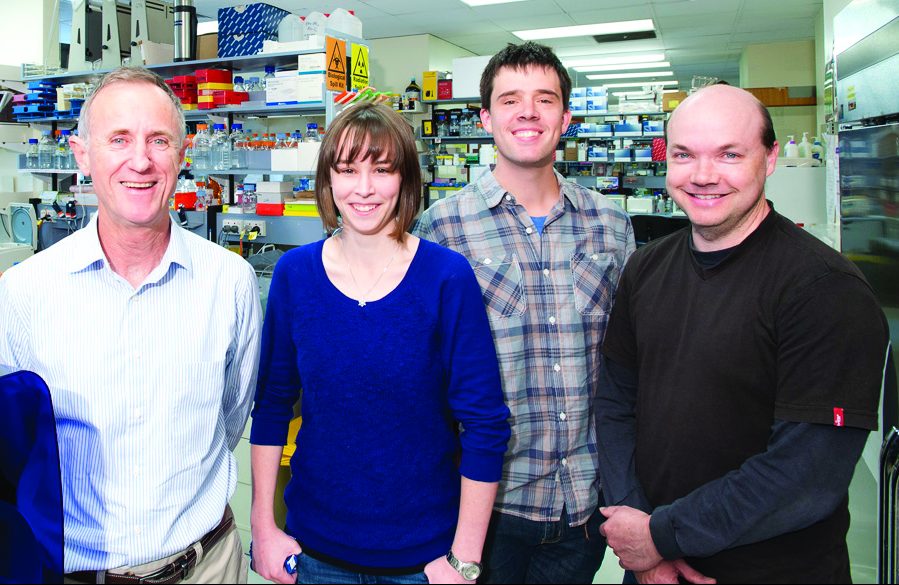 Imagine the impact for breast cancer sufferers if doctors and scientists knew how to stop the spread of this potentially deadly disease. Thanks to your support of the RAH Research Fund, researcher Dr Cameron Bracken is in the third year of his Florey Fellowship, enabling him to investigate why breast cancer is able to metastasise (spread) to other parts of the body.

Based at the Centre for Cancer Biology at the RAH, Dr Bracken has been researching a particular type of gene called MicroRNAs. Although they are small in size, they are very powerful as they act as “genetic off-switches” which control many other genes in cancer.

“This project I’ve been working on thanks to the support of the RAH Research Fund is looking at breast cancer primarily. This is because 90 per cent of deaths from breast cancer have been because of the cancer spreading to other parts of the body and it is very important to understand that process. We are working on trying to understand the genes that are responsible for that movement, to potentially help with diagnosis and hopefully we can actively target these MicroRNA genes and stop the cancer from spreading,” Dr Bracken explained.

“If we can manipulate these tiny MicroRNA genes, it can potentially have a very large impact on the cancer cell because one little MicroRNA can affect hundreds if not thousands of genes. The idea is if we can work out what those genes are and how they talk to each other, then hopefully we will be able to flick those switches to help stop the cancer from spreading.

“We are interested in a few types of MicroRNAs because we know they control breast cancer metastasis, we’ve got strong data on that. We are trying to understand the breadth of the genes that they control and understand how they work to potentially help with diagnosis and decide the best treatment targets for individual patients.”

This exciting research has allowed for Dr Bracken and his team to learn that there is a specific type of MicroRNA that seems particularly important in stopping the spread of this heartbreaking disease.

“We’ve discovered hundreds of genes that this type of MicroRNA controls, including a large number of genes that we know are responsible for cells moving. If we can use MicroRNAs to stop certain groups of genes, like genes that control cell movement, or control a cell’s response to therapy, then hopefully we will be able to stop the spread of cancer.”

Dr Bracken explained that this exciting research contributes to what is known as personalised medicine for cancer patients as cancer varies from person to person. He says they hope to use MicroRNAs to determine what type of cancer a patient has, and how they would respond to treatments, hopefully increasing the survival rate for patients.

“If we can get it early enough, or we can measure people individually, we can make better calls in the future about the drugs we use, including the future possibility of using the microRNAs themselves in therapy. This could potentially be really powerful. However, it is important for us to understand all the things that will go right and wrong when you do this,” Dr Bracken said.

“Receiving funding from the RAH Research Fund in a Florey Fellowship has made my research possible! I have been able to concentrate solely on research with my team of highly qualified scientists without the funding burden scientists often face.

“I am grateful for the ongoing support from people who have made my research possible and cannot thank them enough! Hopefully with a bit of luck my research will be able to help people, and that’s extremely important to me.”